We laughed while statism collapsed

“HE WHO DIES WITH HIS ART ON THE MOST HARD DRIVES, WINS…..IF THAT ART PROMOTES LIBERTY.” –Michael W. Dean

So you want to earn your nerd merit badge, keep the Feens drone proof and get on the Golden Blockchain of Redemption?

We have a torrent feed for all Freedom Feens and Michael Dean After Dark episodes, Anarchy Gumbo episodes and our music and movies. AND, you’ll get new things before everyone else who isn’t using the torrent link!

It works automatically, it’s completely legal (for now), and seeding will get you on the Golden Floppy Disc of Redemption by helping make the Feens’ media drone proof when it BECOMES illegal, which could be any day now, the way the Central Scrutinizer is stepping up its tyranny. Seed if you want, but at least have them. So if we get droned, or the site gets CISPAed, you can turn the torrents back on and start sharing.

THIS IS THE ONLY ONE THAT UPDATES NOW. Will be a lot of BipTunia because that’s what MWD is up to now. (For more info: 2019 Update on Freedom Feens torrents.)

If you want to just copy and paste them, those are:

WHAT DO I DO WITH THEM?

You insert all three feeds into uTorrent (one at a time) and it will AUTOMATICALLY download all the episodes you don’t have, and new ones, once a week every Sunday.

And remember, being in our torrent club gets you on the Golden Floppy Disc of Redemption!

You copy the Feens torrent link to your clipboard. Then open uTorrent, and over on the left, single left click on “Feeds.” Then Right Click on Feeds, and choose “Add RSS Feed.” The feed URL should already be in there if it’s on your clipboard. If not, paste it in to the Feed URL space (after deleting the http:// that shows up automatically). Then in the same dialogue box, under “Subscriptions”, change it to “Automatically download all items published in feed”, and click the OK button. If you’ve never downloaded Feens with uTorrent before, it will start downloading all of them. It may queue some for after the first bunch are done. If you’ve downloaded before, and have some of them, it will only download the ones you don’t have. And when we add new episodes to our Feens Torrent RSS feed, uTorrent will automatically download the new episodes. Easy, fun and breezy!

Add both Feens Feeds, and it will look like this in the program: If you plan to seed, DO NOT remove the completed torrent listings from your downloads list, or people cannot download these files from you anymore, unless you re-download all of them and then leave the torrent listings intact. I didn’t include this fact in the original post, because I thought it was obvious. But we had one fan write us who deleted them and wondered why no one was connecting to him, so I added this part.

WHAT IF I WANT TO HELP, BUT DON’T KNOW WHAT A TORRENT IS, OR HOW TO USE ONE?

Want to contribute to liberty but short on cash? You can help the Freedom Feens without even spending a post-1964 dime.

Download uTorrent (free) and start seeding Freedom Feens episodes and Anarchy Gumbo episodes. We also recommend running PeerBlock (free) while you’re running uTorrent. And when you install uTorrent, chose the option NOT accept the add-ons and toolbar when it asks you. Leave your computer on seeding the torrents, while you’re at work or asleep. Make sure if you leave your computer on 24/7 that you reboot it every few days.

GETTING RID OF THE ADS ON utorrent

uTorrent adds cheesy ads. Some look confusing, like this one (if you see this one or anything like it, do NOT click on it, it won’t likely do what it says it does):

There’s an article on removing ALL the ads from uTorrent, HERE.

I do torrent seeding and sharing of all Feens, Michael Dean After Dark and all the Feens movies and music using an old XP laptop on a table in the corner of the living room. I have it outside of my bedroom so the fan won’t keep me up at night. I have the screen timeout set up to shut off after two minutes of not using the mouse, to save power. I also have it set up to NOT shut off or hibernate when the lid is shut. (Settings for all this: right click desktop, go to properties/power. Or go to Power from the Control Panel.) Change the rest of the settings as shown in these images: Change the settings to what you see here: (These directions are for the program ruTorrent, used in many Linux seedboxes. But there is an equivalent similar operation in almost all Torrent programs. In uTorrent it’s under Options/Preferences/BitTorrent.)

Click on the little gear icon at the top of the program. Then go into sittings/BitTorrent, and click the Enable DHT Network tick box, and the Peer Exchange tick bock. Hit “OK.” 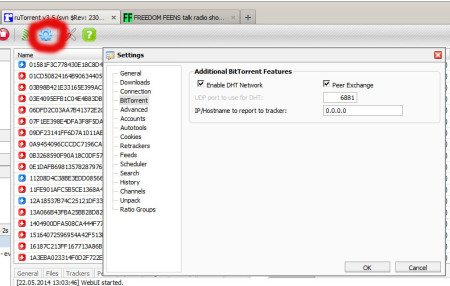 To automatically download all items on the RSS feed, right-click on All Feeds over on the left side of the program. Then left-click RSS Manager to open up the filter settings. Click “Add”, this will add a new filter. in the “Filter” space, add this text, copied and pasted exactly:
/.*/i
You can then either pick the Feens RSS feed, or leave it as All Feeds. Hit OK, and you’re good to go. Doing this solved some issues on one seedbox with nothing working, and solved issues on another seedbox only working on some torrents.
In uTorrent, it’s called “RSS Downloader” and you’ll access it by right-clicking “feeds” over on the left of the program. It should look like this when set up properly: 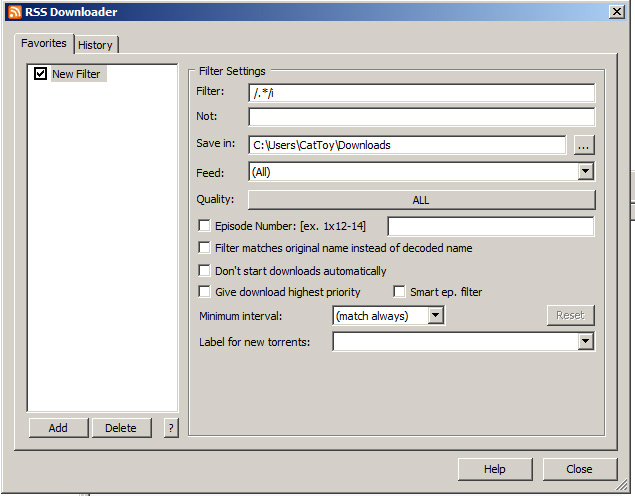 You don’t need to hit “save” or “OK” in uTorrent (there IS no “save” or “OK” in this window in uTorrent). But after you enter the filter, hit “Close” in the bottom right of this window. Then open it back up and you’ll need to left click once on “New Filter” over on the left to see what you’ve added. Notice that I’ve also added my download location in the “Save In” field.
SCHEDULER

I set up the scheduler to NOT upload during times I need my full pipe, like when I’m doing my shows: As of 4/5/14, the entirety of the media on the Feens torrent RSS is 50 gigs (it was more, but I pruned it and deleted all the single episode entries that are also included in archives, and left the archive entries.) It took me 11 hours to do the initial download. With the torrent RSS feed inserted in uTorrent, new episodes upload seamlessly in the background. Except when doing my shows, where full bandwidth is mission-critical, using my full pipe to seed torrents is not noticeable, even when watching HD videos for hours on YouTube.

If you have torrent throttling on your ISP, you can get around it by using Boleh VPN, and setting it to one of the Fully Routed servers. Using Boleh on one computer will not affect the IP and settings of other computers on the same router.

WHAT IF I HAVE A TORRENT PROGRAM OTHER THAN uTORRENT?

Here is a list of torrent programs and their features. Find yours on there and check the column called “Broadcatching (RSS).” It will say if that feature is supported for your program. If it is and you can’t figure out where to insert the RSS feed, a quick Google search of “RSS” plus “(the name of your torrent program)” will usually lead you to a page that will show you how. (Note: Transmission, the default torrent client in most GNU/Linux installations, does NOT have the RSS feature at this time. If you have Transmission and don’t want to install a different torrent program, you should be able to add the feed into the Live Bookmarks of your browser, and click on new items to manually download…When you click on an item, it will open up Transmission automatically and begin downloading.)

Thank you folks, and you’re doing a very good thing by spreading liberty and Feens media to the world. Remember, the more you seed the Feens, the more the State gnashes its teeth and fails.

p.s. If you have torrent questions about Feens torrents that aren’t answered here, please send an e-mail. (Don’t ask us about any non-legal torrents, we dunno about that.) Thanks Sean DuVally for help with this when we were an active show!

The Feens’ last-ever episode, explaining why MWD shuttered the show after 7 happy years. GET and SEED THE TORRENT archives of all 1311 Freedom Feens shows

Get cool shirts from WormShirts.com (on amazon.) They have some Feeny shirts too. Check it out.

Buy us a cup of coffee, or some computer memory. Or cat food. Or Google Ads. Or whatever. NOT tax-deductable, but makes you feel good about yourself.

You can also set up a recurring donation of any amount on Patron. When you do, you'll see that it's under the name "Intergalactic Prairie Studios", that's my bedroom. I'm no longer doing the Freedom Feens, but am doing a lot of other cool stuff, as always.

GET IT HERE ON AMAZON.
Kindle Edition on sale for 5 dollars. LISTEN to Michael W. Dean's band, BipTunia: