29th BipTunia Album, “One More for the Road to Alpha-Centauri” – Listen Free

There are no microtonal songs on this album.

–Additional voice: DJ Dean on “How Much Does She Love Art?”

Get the album on Bandcamp

The microtonal song on this album is “The Number-One Hit Song on Alpha-Centauri This Week.”
It’s in 31 edo.

Get the PDF of LYRICS and liner notes

–There are no microtonal songs on this album.

–DJ Dean in “But You Don’t Look Sick.

–Bob the cat squeaks in concern after DJ speaks in “But You Don’t Look Sick.” 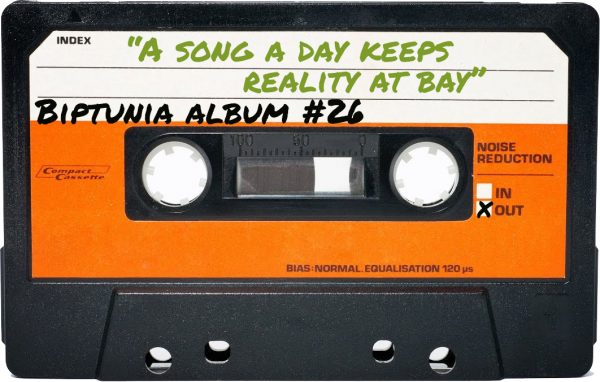 Get the PDF of LYRICS and liner notes

–DJ Dean: Voice on Deviation of the Saturation in 7-8

–Kip Cameron: Voice on “She Really Looks Natural and “The Root of All Drivel.”

There are no microtonal songs on this album.

Get the album on BandCamp

The microtonal song on this album is “Fishing Destiny’s Brain.” It’s in 31 EDO. (Though parts are also 12 TET.)

Get PDF of lyrics and liner notes.

None of the songs on this album are microtonal.

(MP3 file is a 21 minutes of me calling in to Free Talk Live about all this.)

(Scroll below this donation info for the whole story if you don’t want to listen to audio):

If you want to donate to help me out via BTC, you can send it here.
1EvZF634xH7zAYVC9rmegdDAUdPsbJCzJH

BTC will be used for CBD oil.

PayPal / Venmo will be used for non-CBD bills for doctor, oxygen therapy (new oxygen concentrator recently), and other health-related bills.

Donations are NOT tax-deductible, but makes you feel good about yourself.

I explain all this and a lot about my health in general in this 22-minute call. (was 3/4 of an hour on radio, but here I edit out the recorded ads, live pitches, and the bulk of segment intros and outros when they had nothing to do with this topic. Original un-edited file is here, start of show, if you want that instead.)

(I mention in the call that Jim Jesus snitched out Macey Tomlin’s GoFundMe, he brags about that in the show notes here, and also brags about it on this episode of his Podcast.

It’s part of why he got kicked off the Feens.

Her GoFundMe is back up, but still, what kind of person does what Jim did, and brags about it??

If he takes down his episode, let me know, I saved a copy.)

THE DETAILS
I’m on oxygen, have emphysema, asthma, GERD, Apnea, allergies…. I’ve been terribly sick with respiratory issues for the last 5 years. Am on oxygen concentrator at home, always at night, often in the day. And need rented bottles of oxygen for leaving the house.

I have limited ability to do basic things from the oxygen issues.

No I don’t smoke. Actually quit when got very sick, five years ago.

Sleep apnea was the worst they’d seen at the sleep study place. My AHI was 145. (I had 145 hourly apnea events.)

My asthma is life-threatening, doesn’t respond well to usual daily asthma meds. I had asthma and allergies even as a kid.

Also had sinus surgery in January 2019. (And yes, the doc removed a piece of plastic that had been there 5 decades.)

Had sinus infection before the surgery, and caught a lung infection after.

I’ve broken my nose coughing, and cracked a rib.

I retired the Freedom Feens show, it wasn’t fun to have weekly appointments to talk for an hour anymore.

Long story short, hemp-derived CBD oil was recently made specifically legal in my state. I tried it. Help is immediate.

I am still ill and out of shape, and have permanent lung damage. But I have relief for the first time in five years. Takes about 20 dollars a day worth, but it just WORKS. Been on it two weeks. Best two weeks by far in five years.

It is the ONLY thing that helps my horrible lung issues, without side effects. I’ve had limited success with prednisone, but that has nightmarish side effects, and I’ve been on and off it a bunch in the past 5 years.

I had a fundraiser on GoFundMe to raise money for hemp-based CBD oil. People started donating, then they froze the fundraiser. Then they deleted my account with not much fanfare.

I never saw the money. It got returned to the donators.

Their TOS says no fundraisers for “marijuana or marijuana extract” , but hemp-based CBD is legally NOT marijuana now, both at the Federal level, and in my state. I told GoFundMe this after they froze my CBD fundraising campaign. They said they’d get back to me. But the next contact was them deleting my account:

Pretty crass of them to do that. No warning, no chance for me to remedy anything.

People had donated to my fundraiser, but I never got the money, and it got returned to the donators.

There are companies that take BTC for CBD oil.

If you want to help out some other way, but don’t have BTC, PayPal, please send me an email.

(Correction /errata about my mention of Jim Jesus on FTL is in detail at the bottom of this page).

…..And here’s where I called in to Free Talk Live another day to do a correction. The hosts hung up on me at the break, So I didn’t get to do closing arguments, but I said what was needed: